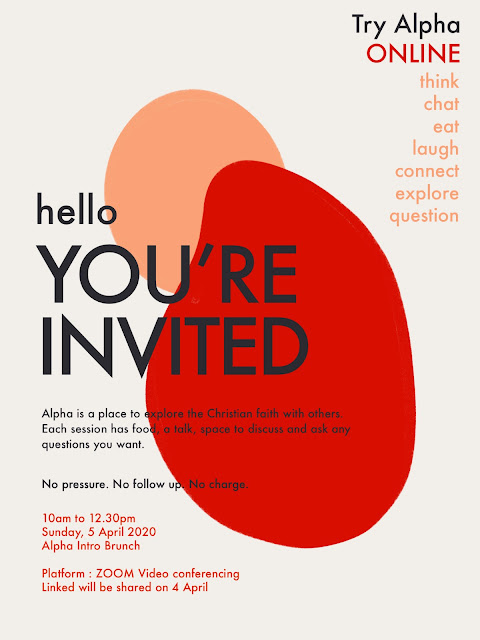 Hi there, I'm organizing an online Alpha, starting with an Intro session on 5 April (next Sunday, 10 am).

You are invited to join this Alpha Intro Session via Zoom.

Register in advance for this meeting:

After registering, you will receive a confirmation email containing information about joining the meeting.
Posted by Chee Min, Then at 10:59 PM No comments:

Hi
This is Part 1 of my sermon/seminar series on "Finding God's Purpose for Your Life". It's about 30 mins long.

The slides for this sermon as pdf handout will be uploaded to Patreon later for patrons to download.
God bless and have a blessed weekend! 👍

3. What does falling in love mean? Is this a key part of love and a successful marriage?

Popular songs overhype the experience of falling in love. This experience is hormone-driven and is also known as infatuation (puppy love). It is not necessary to fall in love in order to have a successful marriage, though the experience of falling in love may provide the starting point that leads the couple towards courtship and subsequently marriage. Infatuation is a passing emotion that may last for a few days or a few months. It is an entirely self-absorbed emotional condition. It turns the infatuated person inwards to focus on how the other party is making him or her feel. Such "love" is not based on a true knowledge of the other person; it is based on an idealised version of the other party. It's hard to sustain infatuation in the long run because it is founded on fantasy, not fact.

As the experience of falling in love is hormone-driven, it can happen to anyone at any time, including those who are already married. When a married person falls in love with someone other than his or her spouse, it will destroy the marriage if the infatuated person acts upon the fantasy by committing adultery. For singles, falling in love with someone who is not married is not a sin. It could possible lead to a more serious relationship later on.

True love is not an emotional trip; true love is a rational and considered commitment. Infatuation between two singles may provide the chemistry to kick-start the relationship. But the two parties will also need to build their relationship on the firmer foundation of Philia and Agape.

Chee Min, Then
Tampines, Singapore
Then Chee Min's current passion is persuading church and marketplace leaders to adopt a missional vision that is transformational, aligning people with God's Kingdom agenda as expressed through the Gospel. He is available to preach, teach and train on missional leadership.